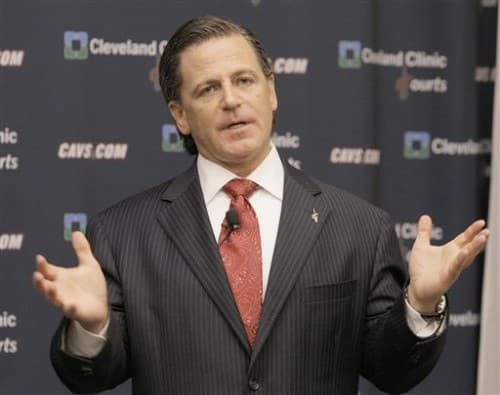 Los Angeles Lakers fans may have started celebrating too early when they heard Chris Paul aka CP3 may be headed to the Lakers from the Hornets. On Thursday afternoon, Chris Paul was a few moments away from heading to the Lakers as part of a 3 team trade when the NBA came in and blocked the trade. The NBA hasn’t given a reason why they blocked the trade yet, but  because the NBA currently owns the Hornets, they have the right to block such a trade.
It was being reported early on that the CP3 trade might not go through because of pressure from NBA owners, and this report turned out to be true. Early Friday morning an email from Cleveland Cavaliers’ owner, Dan Gilbert to commissioner, David Stern, was leaked.
The Email Said:

Commissioner,
It would be a travesty to allow the Lakers to acquire Chris Paul in the apparent trade being discussed.
This trade should go to a vote of the 29 owners of the Hornets.
Over the next three seasons this deal would save the Lakers approximately $20 million in salaries and approximately $21 million in luxury taxes. That $21 million goes to non-taxpaying teams and to fund revenue sharing.
I cannot remember ever seeing a trade where a team got by far the best player in the trade and saved over $40 million in the process. And it doesn’t appear that they would give up any draft picks, which might allow to later make a trade for Dwight Howard. (They would also get a large trade exception that would help them improve their team and/or eventually trade for Howard.) When the Lakers got Pau Gasol (at the time considered an extremely lopsided trade) they took on tens of millions in additional salary and luxury tax and they gave up a number of prospects (one in Marc Gasol who may become a max-salary player).
I just don’t see how we can allow this trade to happen.
I know the vast majority of owners feel the same way that I do.
When will we just change the name of 25 of the 30 teams to the Washington Generals?
Please advise….
Dan G.

Dan Gilbert certainely brings up some good points, as it does appear a little odd that an NBA owned team seems to be trading their superstar to a huge market mere days after a lockout that was supposed to restore some sense of competitive balance. We’ll update you as more reports come out.

The world of tennis can be a little frustrating for British fans. Even though Andy Murray has won two of the sport’s biggest titles,...
Read more

Former Texas Rangers slugger Josh Hamilton was greeted with plenty of boos by a sellout crowd at Rangers Ballpark in Arlington in the outfielder's first trip to Texas...
Read more