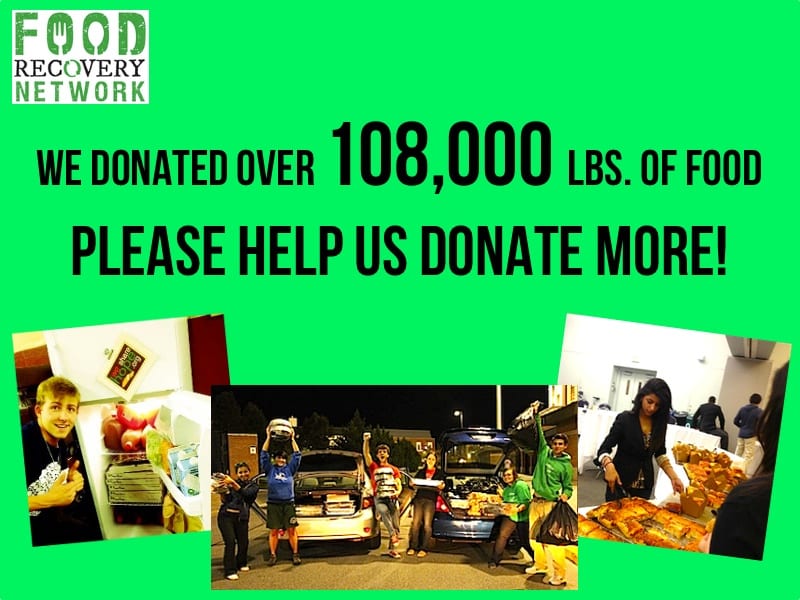 When one thinks of the enormous and incredibly complex problem of malnutrition and chronic hunger, one generally tends to start thinking towards lines of supply and logistics: “If we could only grow more food,” or “if we could only get food from fertile regions to the places where people need it,” or even, “if only we could throw more money at the problem.”
However, it is time to think of the problem from a different angle: one of food waste and food recovery. This is something the folks at Food Recovery Network have put their minds and energy towards, and they have an approach that they think could be a big part of helping hungry people around the United States receive nutrition from an unlikely source: wasted food that more privileged people would have otherwise thrown away.
Food Waste
Food Recovery Network began as an idea in 2010 at the University of Maryland, when a group of students noticed that vast amounts of food was being thrown away after large sporting events and from cafeteria dining halls. When they realized that one in eight people in the D.C. Metro area alone were suffering from hunger, a connection was made: Why can’t we recover this food before it goes to a landfill and get it to shelters where people need it?
Food waste occurs in the developed world on a massive scale and particularly on college campuses. According to the Food Recovery Network, 35 million tons of food per year is wasted in the United States alone, with only 3 percent of that food being composted or donated. That means 97 percent of wasted food ends up in landfills. Furthermore, wasted foods costs Americans $165 billion per year in logistical and landfill costs, as well as contributing a full 25 percent of methane emissions into our atmosphere.
Food Recovery
Pairing wasted food with the hungry seemed like a no-brainer; a win-win. And so it was: In the first few weeks of operation, a group of volunteer students recovered 150 to 200 pounds of food per day to give directly to shelters. By the end of the 2011-2012 school year, they had donated 30,000 meals to shelters in the D.C. Metro area.
After conducting some further research, the organizers realized that only a handful of colleges across the United States had any sort of food recovery program in place, and thus the Food Recovery Network was born in 2012, and it grew rapidly. By the end of 2012, they accomplished two major milestones: Students at their eight-member organizations recovered 50,000 meals, and their organization won a $5,000 grand prize in University of Maryland’s Kevin Bacon Do Good Challenge, as well as the $15,000 national grand prize in the Banking on Youth Competition.
How You Can Get Involved
The Food Recovery Network is showing no signs of slowing down. Branches are popping up at universities around the country, and their members are aggressively recruiting and adding even more chapters.
Starting a chapter at your own college isn’t as difficult as it might seem because Food Recovery Network provides a lot of instructions and support. On the Start a Chapter page of their website, you simply fill out a form and a regional coordinator will contact you to get the process started.
The facts are simple: One in six Americans doesn’t know where their next meal is coming from, yet recovering just 15 percent of the wasted food in the United States would feed 25 million people.
It’s really refreshing to wrap your head around the fact that a dedicated and compassionate group of students figured out a solid, actionable plan to address hunger and malnutrition, while at the same time saving taxpayer dollars and helping take a bite out of global warming. It’s not “too good to be true” either; it’s a very solid and simple plan that just needs dedicated people to step up and volunteer. Will that include you?

Previous articleCooking Without Fire – Hearty Recipes
Next articleWhat Exactly is Chlorophyll and What Does It Do?

In the competitive restaurant industry, success relies on more than delicious food and drinks. Winning restaurants thrive thanks to the focus, speed, and teamwork...
Read more

Implementing eco-friendly practices is a priority of almost every industry. This is excellent news for our planet, as sustainable policies only increase our Earth’s...
Read more