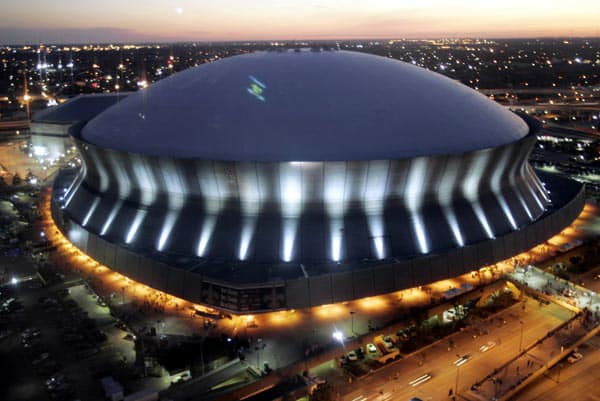 As Super Bowl XLVII draws near, die-hard fans will pour into the streets of New Orleans to catch a glimpse of their favorite gridiron gladiators. However, this year’s Super Bowl is a testament to much more than just a good ole’ toss of the pigskin; it’s an homage to human accomplishment, triumph, and the incredible results that can happen when a community comes together to make a positive change.
It wasn’t very long ago when Hurricane Katrina devastated the rich, historical city of New Orleans, traumatizing its people and its landmarks. When upwards of 15,000 to 20,000 people sought refuge in the iconic Superdome, it was anyone’s guess how well the building would hold up in a storm of Katrina’s magnitude. Although the massive building sustained quite a bit of damage, with crafty remediation and rebuilding, the Superdome is primed and ready to host one of the decade’s most exciting games.

Images of displaced, frightened people huddling in flooded streets are still fresh in most of our minds, as our hearts went out to those stuck in the dome for an extended amount of time. As the roof partially ripped off, and water entered various avenues of the structure, causing significant damage. Luckily, no one was hurt by the damage, and the structure remained in-tact. A new roof was certainly necessary, however the brunt of the damage to the dome came as a result of the thousands of people residing in an area that wasn’t built or equipped to house them.

When tragedy strikes, whether at the hand of nature or humanity, it’s often very difficult to know where to start. Luckily for us, there are third party remediation companies like Sevenson Environmental and the Texas-based company, J & J Maintenance, contracted to clean up the Superdome. When they began working on the Superdome, the conditions were so unbearable that the clean up crew could only stand to be inside of it for a half an hour at a time, according to the BBC.
The remediation of garbage, human waste and damage took months to clean up and remove, and it was debated whether or not the whole thing should be torn down and rebuilt, which would have potentially furthered the environmental impact of the situation.

Instead of tearing the whole thing down, the re-vamped Superdome now stands as a beacon of progress and success for the city of New Orleans. With a total cost of $336 Million, the Superdome remediation and remodel cost significantly less than the Cowboys Stadium ($1.6 billion) and the MetLife Stadium $1.6 billion). “What visitors will see in the Superdome is major, transformational change,” SMG Senior Vice President Doug Thornton remarked.
Doug Thornton also talked about the strategic vision to recreate the building into an ultra-modern stadium to accomplish numerous objectives. Those include re-igniting a major economic engine, securing the Saints long-term, and returning an icon to the New Orleans skyline. This year, when you join millions other Americans to partake in Superbowl Sunday, remember the triumph behind the Astroturf.

Previous article
The Gaza Crisis Continues With Talks In The Works
Next article
Clifton Wine Shop and Tasting Room in Clifton, VA

Whether for urban or agricultural development, land clearing is a process that can harm natural ecosystems and produce a lot of waste. While a...

Community Service Ideas You Can Do With Your Students

Giving back to the community is one of the most honorable things we can teach students. It informs them about responsibility, compassion, and tolerance....