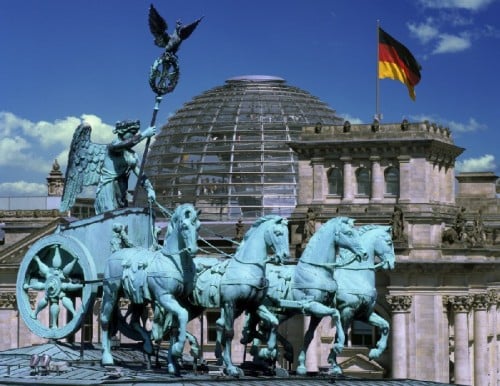 Germany has one of the most strongest economies in Europe today. However, it was not always a unified country.  In 1870, Germany was a collection of 20 Germanic kingdoms who joined together to beat the French in the Franco-Prussian War.  The unified states created Germany and the capital of this new state was Berlin.  Little did they know then how much Berlin would play such an important role in the years to come. Here is a brief overview of the rise and fall of Berlin through the two World Wars.

In 1914, Germany entered WWI, as they wanted to replace the UK as the dominant country in Europe. They could only do this through acquiring more colonies, which was though war.  Germany thought they would win the war and defeat the French quickly as they had done in the Prussian war the previous century.  However, they lost and France, UK and the US sued them for the same amount of money Germany had borrowed to pay for their participation in the war.  This led them into a huge debt and the Kaiser of Germany went into exile.

As the King had now abdicated, it was left to the Government to pay off the debt.  The politicians decided to print money in an effort to reduce the debt, however, this just led to massive inflation.  In 1918, $1 USD was worth 5 German marks. A few years later in 1923, $1 USD was worth 4 million German marks.  With the inflation, people lost their life savings.  Germany then borrowed from other countries to help pay off the loans which helped their economy for while.  However, when the US stock market crashed in 1929, their loans were due which sent them into another depression.  After 11 years of democracy and 2 wide scale depressions, people blamed democracy and this saw the rise of national socialism.

The party was founded in 1919 in Munich and the leader was Adolf Hitler. Adolf told the people of Germany what they wanted to hear, that the crash of the German economy was the fault of the Jews and the Communists.   In times of crisis, people change and in this case they voted for the extreme socialists (something they would probably not normally do).  By 1933, the party had 37% of the votes in Parliament.  The President of Germany gave Hitler the job of Chancellor.  He thought this would be short term as many people before him did not last long as Chancellor.  However, 4 weeks after being in power, someone burnt the Reichstag and Hitler blamed the Communist Party who were the single largest party apart from the National socialists. Hitler then went to the President and told him the only way to stop the war on Communism was to be given the right to imprison anyone against the Socialist Party.  This basically meant he could imprison anyone and gave Hitler the power of dictatorship.

In September 1935 the Nuremberg Laws were introduced which defined Jews as a race and made them second class citizens.  It was the start of the eradication of Jews from Germany and from other countries Germany took over.   In 1939, Germany invaded Poland which started WWII.  By 1941, they had defeated most of Eastern Europe and in 1941, they invaded the Soviet Union.  However, this meant they had more Jews to deal with and it was at this point that the Nazis came up with “The Final Solution”.  This was when they decided to build death camps.   Auschwitz was the nearest death camp to Berlin and in 1941 and 1942, the Nazis took the last remaining Jews from Berlin to these death camps.

The Fall of Berlin

Invading Russia took its toll on the German army and at the same time the US entered the war.  The Germans lost WWII and Berlin was still seen as the capital and hence power of Germany.  Whoever controlled Berlin would control Germany and the allies were not going to let Germany have control this city by itself, after all they had started two major wars in the past 20 years. This was the beginning of how Berlin was divided into East and West Berlin, which would then lead to the construction of the Berlin wall diving the city for nearly 30 years.

There is so much history in Berlin, this post only barley skimmed the surface.  You will need at least one week in Berlin to see all the sights and visit the museums.  If you are worried about accommodation, there are many Berlin apartments for rent, some located in the centre of the city so you will be near all the attractions.  The best time to go weather wise is in the summer months when it can get up to 30 degrees Celsius.  For those who want to sample the Christmas markets, visit in November and December, but wrap up warm as the temperature drops to minus 20 degrees Celsius.

Please note: The author is not a historian, some facts came from the Brewer’s Berlin Walking Tour, others from our friend Google.