Andy Whitfield Has Lost His Battle With Non-Hodgkin Lymphoma 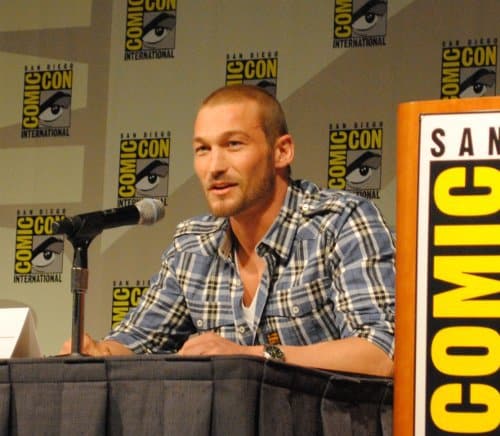 Andy Whitfield, the star of Spartacus: Blood and Sand, has died at the age of 39.
Whitfield died on Sunday in Sydney, Australia, 18 months after being diagnosed with non-Hodgkin lymphoma, according to his family and manager.
His wife, Vashti, described him as “our beautiful young warrior”.
Whitfield was born in North Wales and moved to Australia in 1999. Actor Liam McIntyre took over Whitfield’s role in the TV series when he became ill.
“On a beautiful sunny Sydney spring morning, surrounded by his family, in the arms of his loving wife, our beautiful young warrior Andy Whitfield lost his 18-month battle with lymphoma cancer,” his wife said in a statement.
‘Courage and strength’
“He passed peacefully surrounded by love. Thank you to all his fans whose love and support have helped carry him to this point. He will be remembered as the inspiring, courageous and gentle man, father and husband he was.”
Chris Albrecht, president and chief operating officer of Starz, said he was “deeply saddened” by Whitfield’s loss.
“We were fortunate to have worked with Andy in Spartacus and came to know that the man who played a champion on-screen was also a champion in his own life,” Albrecht said in a statement.
“Andy was an inspiration to all of us as he faced this very personal battle with courage, strength and grace,” he added.
Whitfield played the title role in all 13 episodes of the first series, screened in 2010, and was about to shoot the second series when he was diagnosed with cancer.
Spartacus, which attracted media attention in the US for its graphic scenes of sex and violence, was first seen in the UK on the now defunct Bravo channel before moving to Sky One.
In an interview with the Deadline Hollywood website last year, Whitfield said having cancer had taught him some important lessons.
“After the initial shock – I was a healthy young man and had no idea this could happen – it was frustrating that the first season was ending on such a high note.”
But he added he then found “time to heal, figure things out and spend time with my family. Stay in the now and enjoy every moment.”
Whitfield’s Spartacus co-star Lucy Lawless also paid tribute to the actor in a statement to EW:
“Andy Whitfield left an indelible mark on all of us in the Spartacus family,” she said. “He was a gentle man who never said a bad word about anyone, a gifted photographer, engineer (no really!) and a brilliant actor.
“How lucky we were to have him grace all our lives. Godspeed, Andy!”
Photo Credit: @bob_calhoun

Previous Dead Island Review: Game Falls Short Of All The Hype
Next Kim Kardashian Releases a Letter About 72-day Marriage